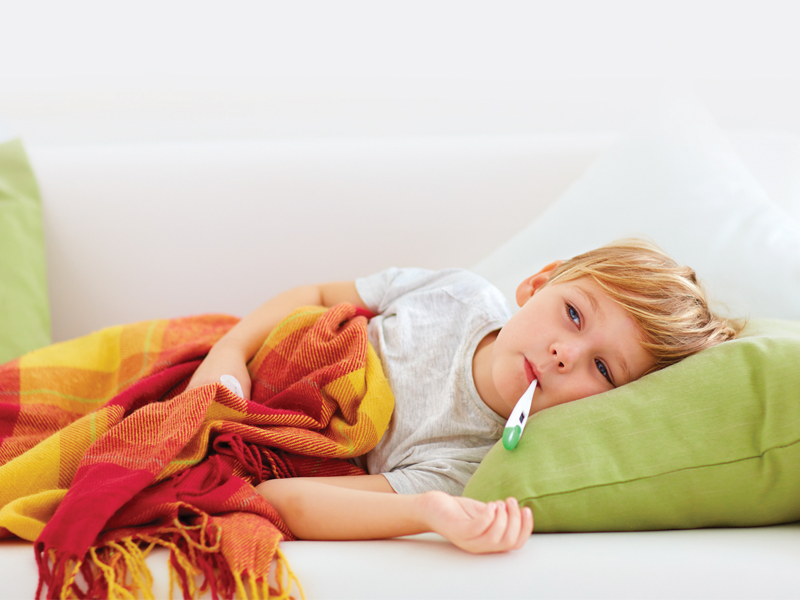 by Ronica O’Hara
March brings the first whiffs of fragrant spring air, along with a heightened chance of runny noses, coughs, sore throats and congestion in youngsters. The spring and fall months are the most likely times to catch a cold because seasonal allergens inflame nostrils, making it easier for cold viruses to have their way. Although many worried parents reach for cold and cough medicines, antihistamines or even antibiotics, there is little evidence that these ease symptoms or hasten recovery, and they may even cause harm, according to reports from the American Academy of Pediatrics (AAP).
The AAP suggests some natural approaches for symptoms, including sponging for fevers as well as hydration, honey and chest rubs. A metastudy published in American Family Physician in 2012 found that treatment with buckwheat honey, Umcka ColdCare, nasal saline irrigation, a vapor rub or zinc sulfate “may decrease cold symptoms in children.” Here are those and some other natural strategies:

1. Hydration to flush out germs: “If your child doesn’t like drinking water, add a spritz of lemon, ginger, crushed berries or fruit juice to give it some flavor,” advises Heather Tynan, ND, of Evergreen Naturopathic, in San Diego. A child can also drink coconut water or suck on frozen berries or popsicles.

2. Honey for sleeplessness and coughs: Honey can kill both viruses and bacteria, and in a Pennsylvania State University study, a bedtime teaspoon of buckwheat honey beat out dextromethorphan, a cough suppressant used in over-the-counter cold and cough medicines, in helping kids sleep better and cough less. (But don’t give honey to a kid under age 1 because of the risk of botulism.)

3. Chest rub to ease congestion: A chest rub can help clear a child’s congestion, but choose natural ingredients like aloe, eucalyptus, lavender and rosemary; that’s a safer bet than the standard mentholated products which can cause breathing problems in toddlers. Natural alternatives are sold at health food stores, and a do-it-yourself version can be made simply by mixing together one cup of coconut oil, 20 drops of eucalyptus oil and 10 drops of peppermint oil.

4. Essential oils to fight infection: A combination of five essential oils—clove, lemon, cinnamon bark, eucalyptus and rosemary, commonly known as four thieves—has antibacterial, antiseptic, antiviral and immune-stimulating properties, says Tynan. “Diffuse it in your child’s room, or dilute well (about one to two drops per five milliliters of carrier oil) and apply under their nose, behind their ears and on the back of their neck, on their chest and on the soles of their feet.”

5. Saltwater gargle for a sore throat: As soon as anyone in her family shows signs of getting sick, they begin gargling with salt water, says Tangela Walker-Craft, a mother and former teacher in Lakeland, Florida. “Saltwater loosens mucus and flushes bacteria out of the throat. It will also help to reduce swelling,” she says.

6. Elderberry or Umcka to ease symptoms: A recent meta-analysis in Complementary Therapies in Medicine concluded that elderberry syrup (in stores as Sambucol) reduces the duration and severity of cold and flu symptoms. “The syrup is sweet and delicious, so typically very easy to get children to take,” says naturopathic doctor Kiera Smialek, of Scottsdale, Arizona. Umcka ColdCare, based on the South African geranium, halved cold symptoms in five days compared to a placebo in a University of Chicago study.

7. Zinc sulfate to shorten a cold: If taken within the first 24 hours of symptoms, zinc sulfate tablets or syrup can reduce colds by a day or more, studies suggest.

8. Warming socks to boost immunity: This odd-sounding strategy “increases circulation, decreases chest congestion and increases the activity of the immune system,” says Smialek. Soak a pair of cotton socks in ice cold water. Wring them out and place them on the child’s feet. Cover them with thick dry socks, ideally wool. Keep them on overnight. In the morning, the wet, cotton socks will be dry.

“Remember, the best remedies for cold and flu are rest and time,” says Tynan. In the meantime, though, steps like these “can help you kick it much faster and reduce some symptoms while you’re doing so.”

Ronica A. O’Hara is a Denver-based health writer. Connect at [email protected]

About the Author: Natural Awakenings